How do you plan for eCommerce when your company is pre-revenue, pre-final product, and still making key hiring decisions?

Ultivue understands that question well. This fast-growing Cambridge, Massachusetts-based startup operates in the digital pathology space. Its mission is to improve the tools available to pathologists and cancer researchers for tissue biopsy sample analysis. Using a proprietary and novel DNA-barcoding and staining technology for identifying biomarkers on an individual cell within a tissue sample, Ultivue’s products and services deliver information-rich images that help transform qualitative analysis into quantitative analysis.

In January 2018, the startup had achieved a significant technology development milestone which prompted a serious acceleration of its commercialization plan. Company officers would be unveiling that technology at a major conference in April 2018, and it was abundantly clear that Ultivue’s homegrown website was not a viable long-term solution.

“We needed professional online content that would help us build visibility and awareness in an incredibly competitive marketplace,” says Philippe Mourere, Ultivue’s Senior Vice President of Commercial Operations. “The website had to be something we could use immediately for marketing and hiring purposes because we were still staffing up.” To that end, the company hired a digital marketing agency, Web Design Boston (WDB), which got to work on designing an engaging marketing website for Ultivue.

But even as this mission-critical project was getting underway, Mourere was already thinking about the future. He wanted to ensure that Ultivue could take full advantage of the power of eCommerce once the company’s products and services were available for purchase. What he wanted to avoid doing, however, was building a CMS and then rebuilding everything all over again on a separate eCommerce site. Luckily, WDB had a solution for that and introduced Mourere to ten24.

“We have strong relationships with really good marketing agencies who bring us in when they have projects that involve complex eCommerce requirements that are outside their wheelhouse,” explains Brad Gustavesen, ten24 Partner and Vice President. “It’s a great way to deliver the best, most efficient solutions possible.”

Not Your Typical Project 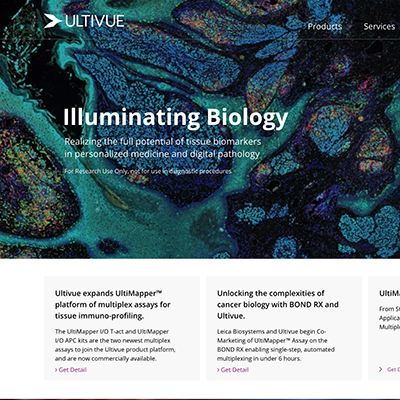 What was extremely unusual about this situation is that ten24 typically works with clients who already have a menu of products and services or need to overhaul an existing Web presence. The Ultivue scenario presented an interesting set of challenges. ten24 would be building Ultivue’s CMS and eCommerce functionality at the very same time that WDB was designing the site. Everything needed to go live on an extremely aggressive timeline that could not budge due to Ultivue’s conference appearance in April. It was a special opportunity to get involved with a very different kind of project.

By February 2018, ten24 was on board. The plan was to have a two-phase approach to the work: Phase 1 would be getting the CMS and a “non-shoppable” eCommerce site up and running by April. Phase 2 would see the eCommerce site go live in September, with the static non-shoppable buttons turning into active ones.

As Gustavesen notes, embracing flexibility and the concept of “future design” was essential. “This project was all about building in flexibility while we were working,” he says. “We knew that certain things would be changing along the way, like specific product offerings and their prices. And we were also building components of the eCommerce site that wouldn’t actually be going live until a future date.” The most important thing for ten24 was to maintain consistency between the 'right now' and the 'future' elements of the site so that it could swap out specific pieces whenever they were ready.

Because the CMS and eCommerce user experiences had to have the same look and feel, the Ultivue project required that ten24 work closely with WDB who did the designing, wireframing, and engineering for the CMS portion of the site. ten24 would be responsible for building the CMS site and engineering the eCommerce functions, including data flow, eCommerce workflow, and all integrations. Given the non-moveable deadline for Phase 1 and the incredibly ambitious timeline for the entire project, there was a lot of hustle. “We all had to be prompt with feedback,” Gustavesen observes. “Everyone had to motor pretty quickly.”

It’s All in the Details 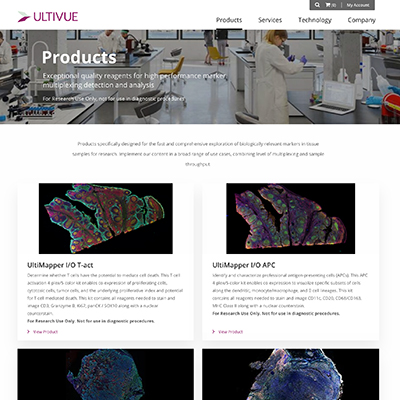 For many startups, embarking on a project of this magnitude without revenue or final products would be unthinkable. Gustavesen points out, however, that Ultivue had clearly done its homework. “Here’s a company that’s still getting buy-in from the scientific community and is hiring its own staff even as WDB and ten24 are working,” he says. “But Ultivue had already done lots of thinking about and planning how it wanted to do business. It was incredibly helpful.”

For example, Mourere and his Ultivue colleagues had outlined their operational flow ahead of time. They had mapped out exactly what would happen from a workflow perspective once a customer placed an order. They knew what they wanted for customer data management and had also identified a shipping partner. And they had dedicated an entire space in their Cambridge office to function as a war room during the CMS and eCommerce project. Mourere says the war room made an especially big impression on ten24. “Every inch of the wall in the room was covered with printouts and notes detailing what our commercial operations would look like,” he says. “ten24 was pretty excited to see that.”

Mourere knew that given Ultivue’s startup status, he would need a scalable CMS and eCommerce solution that would be able to keep up with the company as it grew, added products, and matured. “We needed to establish visibility and tell our marketing story first, of course, so that people would know who we are and would want to come work with us,” he says. “But we also had to plan for operational and commercial success – we had to identify what that success would look like at zero as well as 2-3 years down the road.” For Mourere, eCommerce success would revolve around a solution that offered end-to-end automation and integration. And that’s exactly what he got.

Using Slatwall, ten24 engineered and delivered an eCommerce solution that supports everything from Ultivue’s sales order and quotation management to product delivery. It is also designed to integrate with a number of systems including Salesforce and NetSuite. To say that Mourere is pleased with the results is putting it mildly. “What our friends at ten24 provided is a turnkey solution which incorporates not only design and delivery but also function and flexibility,” he says. “With the Slatwall eCommerce platform, we now have one single, automated system for managing quotes, orders, and inventory, and we’ve achieved cross-functional communication for sales order management.”

What our friends at ten24 provided is a turnkey solution which incorporates not only design and delivery but also function and flexibility.

Ultivue has a rather complex order and post-order process. But with Slatwall in place, it doesn’t matter whether a customer orders by phone with a credit card, faxes a purchase order, or visits the Ultivue website and orders directly. In the first two scenarios, a customer service specialist at Ultivue uses Slatwall’s admin function to place the order on the customer’s behalf. In the website scenario, the customer shops directly online. Regardless of the way orders come in, Slatwall makes it possible for everyone involved to be notified every step of the way.

Customers, for example, can log in to their Ultivue account and see everything from their quote and order history to the status of their pending orders. Ultivue team members can log in to Slatwall as admins to create quotes, place and manage orders, and monitor shipping. And thanks to the integration capabilities with other enterprise solution platforms that ten24 will complete, data will constantly sync and flow back and forth between Slatwall, Salesforce, Netsuite and other systems. According to Mourere, “It’s an elegant and secure system design that has multiple entry points but one single process overall.”

In it for the Long Run 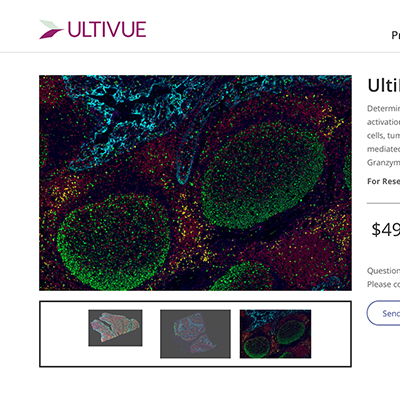 As far as Mourere is concerned, there was only ever one clear choice for Ultivue’s eCommerce project. “We knew that ten24 was the right partner for us,” he says. “They came well recommended and had excellent references, and they know the landscape well. But even more than that, everyone at ten24 had an extremely high level of professionalism. They went above and beyond to deliver for us.” Mourere notes that despite the project’s incredibly aggressive timelines for Phases 1 and 2, ten24 still managed to meet each phase’s deadline one day early.

Gustavesen says the experience was mutually positive. “It was fun for us to work with an organization that’s only just getting started,” he observes. “Ultivue’s technology is fascinating and the company provides important and impactful products and services for oncology research. We’re here to help Ultivue however we can.”

At a Glance – Project Highlights

What our friends at ten24 provided is a turnkey solution which incorporates not only design and delivery but also function and flexibility.