Based in Sanford, Florida, Peak Machine Tools imports and sells electrical discharge machining (EDM) consumables to manufacturers. This growing business is thinking big!: the sign above the company’s front door proudly proclaims, “Everything EDM.” As Operations Manager Garrett Hayes explains, “It doesn’t matter what part of their EDM machines our customers need help with. As far as consumables are concerned, we’ve got what they need.” Since 2002, Peak has been serving customers in the U.S. and the Caribbean. Manufacturers in the medical, aerospace, defense, stamping, and tool and die sectors all rely on Peak to ensure their EDM machines stay up and running.

Peak’s 19-year (and counting) track record of success is a direct result of its commitment to changing with the times. “In this market, you’ve got to be flexible and willing to adapt, or you’ll die on the vine,” says Hayes. “You always have to be looking for ways to make your business work better, so you can help your customers work better.” Peak has been able to do both, thanks in large part to its long association with Slatwall Commerce. In fact, Peak was one of Slatwall Commerce’s first clients.

When it initially approached Slatwall Commerce, Peak had only a rudimentary website that a friend had built. “What Slatwall Commerce gave us was a really professional site,” Hayes notes. “We got something that did a much better job of showing the depth and breadth of our capabilities.” The new site was just that: a presence on the Internet for Peak’s EDM customers and prospects. There was no eCommerce functionality in this very first iteration of the website – people used it to get familiar with Peak and its products, and they’d call to learn more or place an order.

In the early days, this solution was perfect for Peak. As with most companies in B2B settings, it had traditionally relied on a direct selling model. The Peak team would make personal visits to customers’ facilities, get orders, and take them to the warehouse, where they would be processed and shipped out. Eventually, however, Peak was ready to take the next step.

“We could see that the industry was beginning to change, and so were people’s needs and interests,” says Hayes. “The B2B space was starting to look for automation in its processes. It made a lot of sense for us to explore doing business digitally. We wanted to jump into eCommerce because it was a smarter way to work, and it was what our customers were looking for.”

When it first opened its doors, Peak primarily provided wires and filters to its customers. Over the years, the company has greatly expanded its product line, adding graphite, EDM tubes, wear parts, and resin. Getting all of that product information online was the first step in readying the Peak website for eCommerce. And that meant educating the Slatwall Commerce team. “Seventy-five percent of people don’t even know what EDM is,” Hayes points out. “It’s a very specialized and different market.” Hayes and his team knew it was essential for everyone at Slatwall Commerce to understand what all of Peak’s products were and what they did in order to describe them properly on an eCommerce-enabled website.

Above all, the new functionality had to be easy to use. “We wanted to make it as simple for our customers to buy from our website as it is to buy from Amazon,” says Hayes. “In the manufacturing sector, you have a lot of engineers and clients who haven’t necessarily grown up with the technology that the younger generation takes for granted. The more automated and user-friendly we could make things for our customers, the better. We also knew that the storefront had to work on mobile as well.” Launching a storefront with Slatwall Commerce’s B2B eCommerce Kickstart solution checked all the boxes, providing them with a robust customer storefront and complete B2B feature set while reducing the overall time and money investment.

Peak’s existing (and prospective) customers can now search for and set filters that help them find product information. They can put things into their digital shopping carts and pay for them with a credit card or purchase order. Once they’ve placed their orders, customers can use their MyAccount portal to view orders and check on their status. Customers can also create reorders from existing orders: Slatwall’s flexibility enables users to select everything from the entire original order or just choose specific items within the original order. 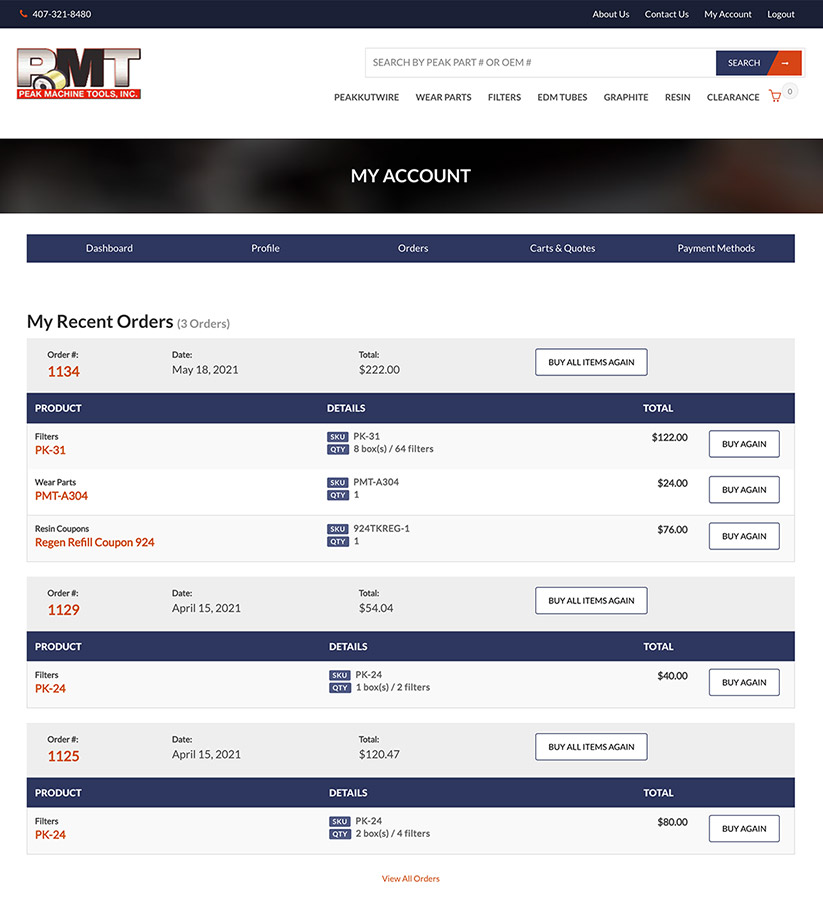 Peak’s eCommerce site also delivers huge benefits on the back-office side of things. Before eCommerce, Peak had been using QuickBooks® Enterprise to handle product orders, manage inventory, and process customer payments. An entirely separate system generated and printed shipping labels and packing slips. It wasn’t an ideal setup from an efficiency standpoint. Peak was also finding it a challenge to use QuickBooks to manage multiple inventories (in addition to its Florida headquarters, Peak has a second warehouse in Pennsylvania).

As Dave Crouch, CEO of Slatwall Commerce, explains, Slatwall changed all of that. “We streamlined everything for Peak,” he says. “The Slatwall eCommerce platform allows them to scale more easily, maximize their sales efforts, and achieve more efficient operations.” Slatwall now processes all orders and passes that information out to QuickBooks Online, where it is reconciled for accounting purposes only. All other business functions and data are managed within Slatwall, including customer information and accounts, as well as product information, order histories, inventory, packing slips, and invoices. “Peak is a small business looking to enter new markets,” Crouch adds. “The digital channel has helped open new opportunities for them.”

Hayes agrees. “We’ve definitely seen an increase in business because of eCommerce,” he says. “There’s a lot of traffic that goes through the site because people can find us online easily – we get a lot of exposure. We’ll have brand-new orders just show up simply because people are able to buy online. More and more first-time contacts and requests for pricing are also coming through the site.”

The collaboration between Peak and Slatwall Commerce is ongoing and ever-evolving, according to Hayes, who says, “We’re always coming up with new ideas and thinking about different ways to use our storefront at Peak – and then we work with the Slatwall Commerce team to make those ideas happen.”

One of these latest enhancements to Peak’s eCommerce functionality is built around resin – a critical EDM consumable that’s one of Peak’s product offerings. In the EDM machinery that Peak supports, any conductivity in the water is detrimental to the final manufactured product. That conductivity is caused when tiny, positively charged metal particles become suspended in the water. As they float around and land on anything metal, they discharge, creating little pits that erode away, create rust, and cause surface issues. This “secondary EDM-ing” can wreak havoc on machine tolerances. The resin beads that Peak sells are designed to prevent secondary EDM-ing by cleaning the suspended metal particles and thus taking the conductivity out of the water.

Most of Peak’s products are fairly typical in that a customer selects a product, places it in a cart, and has it delivered. But ordering and reordering resin is a little different: the resin beads in an initial order come in a bottle and have a specific lifespan. Once that lifespan is reached, the bottle needs to go from the customer back to the supplier, where the beads are changed out, cleaned, and put back in their bottle. The replacement is then delivered back to the customer on a recurring basis that’s determined by the frequency of the customer’s use of the machine tool in question (think of it as the EDM version of the office water-cooler service).

Historically, Peak had been handling its resin re-orders by having customers buy resin refill coupons that were printed and sent to them in the mail. Whenever the customer redeemed the coupon, someone would arrive to take away the spent resin bottle and drop off a new one. Hayes began to wonder if this manual, time-intensive ordering process could be improved by automating it within the storefront; he asked the Slatwall Commerce team if it was possible to add this functionality to Peak’s eCommerce capabilities.

Automating for a competitive edge

The result has been nothing short of a game-changer for Peak and its customers. For starters, the entire resin order and reorder process is now handled automatically: customers go onto Peak’s website and order their resin coupons according to the size of the container they need. Slatwall automatically recognizes who the customer is and generates the coupon they need. “It’s as simple as can be for our customers,” Hayes says. “Engineers can now order and pay for their resin online, right from their laptop or even a phone. It’s all digital now.”

Slatwall then takes the customer order and uses it to create and send the corresponding purchase order to the resin vendor, prepopulated with that customer’s ship-to address. The entire process is completely hands-off – there is no manual intervention required from Peak at any point.

Aside from the obvious ease and convenience of enabling resin eCommerce through Slatwall, there’s also the competitive advantage that this automation delivers. “Nobody else in the EDM consumables market has online resin order capabilities,” Hayes explains. “We’re the only ones – the Slatwall Commerce platform has set us apart and given us a real edge over our competition. It’s a huge differentiator.”

This competitive edge is even more impactful when you consider that Peak is a three-person company that goes head-to-head with much larger importers of EDM consumables. As Hayes explains, “We’re significantly smaller than our competitors, but our eCommerce site outperforms and outclasses our rivals on every level. We can do the dollar amounts, and move the inventory, and make the sales that we do because of a robust and well-functioning website. Slatwall has taken us from the Stone Age to the cutting edge.”

A work in progress

This isn’t the end of the story by any means. Hayes is already imagining future enhancements to his Slatwall-powered eCommerce site. He says he’d like to bring the same kind of automation and functionality to the graphite side of Peak’s EDM consumables that’s already been accomplished with resin. Currently, all graphite orders are done by phone and email, and Hayes acknowledges that getting everything online will be a significant undertaking.

Hayes would eventually like to see the graphite quoting and order process done through Slatwall and automated to the point where quotes are delivered to customers instantaneously – without requiring Peak to interface separately with the graphite manufacturer. He’s well aware that this is a big ask, but he’s also confident that he has the right eCommerce partner with Slatwall Commerce.

“Peak is always changing with the times in order to help our customers be more productive,” he says. “Our eCommerce journey is constantly evolving, too – Slatwall is an essential part of that journey. I don’t ever see a time where we won’t be working with our account team in some capacity. We always know the end results are going to be great.”

At a glance – project highlights

The Slatwall Commerce platform has set us apart and given us a real edge over our competition. It’s a huge differentiator.